Presidio Wall is arguably the most popular Pickleball facility in the City (although try getting a pickleball court reservation at Goldman Tennis Center).  Lots of things to like about playing there – great spirited community of players, competitive play, free intro classes, and parking a’int too hard.

And things that annoy at Presidio, starting with terrible overcrowding and long queues to get on a court.  Plus the venue is dual-lined, which means net set-up, take-down & storage DAILY to make sure drop-in sessions run smoothly for the 3 hours of play we’re allocated by SF Rec & Park Department (RPD).  Good luck with their funky court reservation system outside these hours, btw.

We’ve been clear with RPD since interim-pandemic racket-sport play resumed that Presidio Wall needs to become a permanent six-court facility to meet recreational demand, just like Louis Sutter.  RPD has instead insisted on a dual-lining policy, which worked back when Presidio Wall was called Julius Kahn, but times have changed, and the popularity of Pickleball has exploded.

So what did RPD do?  They dual-lined the remaining two tennis courts (#3 & #4) with six courts this past week.  And RPD forewarned NO ONE, not the neighborhood, not even Supervisors Stefani and Chan who were in contact with RPD on our behalf and told a “PLAN” was on it’s way.  Plus no information on venue access or reservation rules for pickleball or tennis players.

Very typical of RPD’s dis-interest in working WITH our community.

But is dual-lining a good solution?

Yes and No. Sure, it’s good to have a place to overflow when the PW courts are packed, BUT there a lot of reasons this dual-lining strategy is FLAWED. Even local Pacific Heights neighborhood groups endorse an equitable move to six permanent PB courts and preserving two courts for tennis plus the basketball court for local community use.

Dual-lining courts at 7 other tennis venues has resulted in conflicts with the Tennis community and even verbal incidents.  Dual-lining also requires that Pickleball players must bear the burden of providing our own nets and do set-up/take down.  The task of hauling a 25+ pound net from your car to a court and back again borders on cruelty for a sport where most players are seniors!  And hosting drop-in sessions at places like Presidio Wall requires volunteers, many of them, which becomes a logistic nightmare.  Btw, thanks to everyone who signs-up for this responsibility – you make your fellow players very happy, while RPD gets to claim they’ve solved the demand need.

Bottom line – a permanent court venue development strategy in various parts of the City resolves these issues and Presidio Wall can better serve the northern neighborhoods.  It’s time for RPD to change their thinking.  Sure High Schools need practice tennis courts, but if RPD won’t even talk with the Pickleball Community or reveal their plans for managing growth of the sport, how can they hope to claim they have the public’s best interest in mind with how they allocate their facility space?

Pickleball players – it’s time to step up the noise level.  Stay tuned for calls-to-action demanding that RPD start behaving like a responsive City department and working with our community.

In the meantime, show your support to your local neighborhood organization, or write your SF City Supervisor – here’s a link to their contact information https://sfbos.org/roster-members.

QUESTIONS/COMMENTS??  Looking to get involved?? 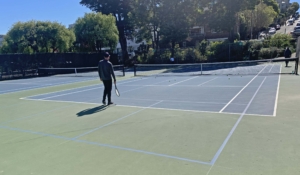 Faint blue lines on Courts 3 & 4 at Presidio Wall.  And only 2 feet of baseline space to the tennis net. Bad job.