It’s no surprise that Felix and Violet both say “I love pickleball” simultaneously.  Violet first started playing when a friend introduced her to the game in 2018.  She bought 2 of the cheapest paddles for $58, and encouraged Felix to come along and play. They first went to West Lake to watch, but learned the rules of the game mainly on YouTube, particularly the scoring.

They soon started playing with Freddie and Willie at Louis Sutter Playground back when it was a little-used pair of tennis courts.  In those early days of SF Pickleball, organized play was being set up with portable nets in parking lots, on basketball courts and even at Rockaway beach in the sand.  The Sutter group played everywhere they could, and eventually convinced the City to install permanent Pickleball courts in 2019 as part of a resurfacing project of McLaren Park tennis court facility.

Violet is a retired nurse and received plenty of CPR training during her career.  One day in May, 2021 at Louis Sutter, a fellow player went down on a court during a game. He couldn’t get up and suddenly lost consciousness. “Someone call 911” was the cry. But Violet jumped in and started CPR and checking his pulse. Another person eventually helped with CPR so she could check on his breathing. He was fairly stable by the time the EMT’s arrived to take him to the hospital. He received a triple bypass, and 5 months later he was on the court again, happy to shake hands and thank Violet for her quick action.

Felix & Violet play Pickleball on cruise ships whenever they travel.  Their next trip, their first trip since the pandemic, is to Iceland in June.  They were on cruise right before COVID arrived and they almost got stuck and quarantined onboard.  And though they have cruised Europe and Mexico, for them there’s nothing quite like playing Pickleball at Sutter among friends. 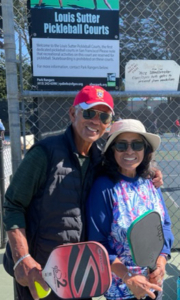