Debbie and her husband Dennis are founding members of the ukelele group, the G-String Band.  “Playing an instrument is good brain activity.  My mother had dementia, and I don’t want it.”  The G-String Band has entertained our local Pickleball crowd during social events.  They do some really fun songs.  It’s a labor of love requiring band members to meet up at Debbie’s house 3 times per month for a 5-hour rehearsal.  That’s quite a drop-in play session.  “If you can’t play, pretend & smile. Everyone will love looking at you,” Debbie quipped either about the band or Pickleball – I wasn’t sure which.

As for Pickleball, Debbie still feels she’s learning, and has recently been playing with smaller groups. She been at it for 5 years, and plays at Sutter, Presidio Wall, West Borough, and Parkside.  Playing ball and playing with the band – keeps you running and humming! 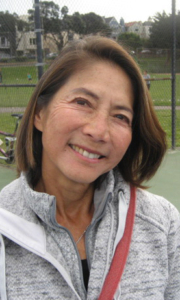 Competition Event in May @Sutter courts
Scroll to top