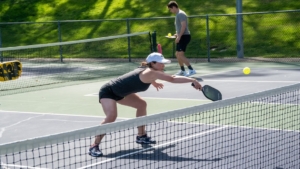 Twenty-nine-year-old Sydney Mondry and her two younger brothers were looking for a way to bond with their dad on a holiday visit to Aspen. She suggested they play a casual game of pickleball. “Our dad”, she explained, “is a 5.0 player.”  Of course, it was no wonder he beat them. Repeatedly. But while they may not have been successful on the court, the game worked wonders, opening the door to spending more time together. It also inspired the three Mondry children to develop a new business, Erne pickleball, an online platform connecting new and more experienced players with all things pickleball. (ernepickleball.com)

When Sydney is not playing pickleball, she is using her MFA in creative writing and working as a freelance college essay coach. Like so many other players, Sydney really got into the game during the pandemic, playing at both Presidio Wall and Goldman Tennis Center in Golden Gate Park. While she initially didn’t know any players at PW, she now considers many of them her old friends. “I love the game,” she said, “I’ve made friends of all ages. I want it to remain an outlet, a way to hang out with people and have fun.”  Sydney has also volunteered for the SF Pickleball Community’s Boys and Girls Club Youth program starting up this fall. Her brother, Michael, helped initiate this effort to introduce pickleball to neighborhood kids before heading off to graduate school in Chicago.

Sydney has become a competition player.  She met her doubles partner, Trevor Smith, at Presidio Wall.  They recently played at the PIG (Pickleball Is Great) tournament in Sunnyvale.  She’s a 4.0 player now, which probably means her father can still beat her, but we’re sure she’s going to start beating him a lot sooner than he expects. 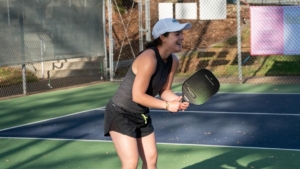