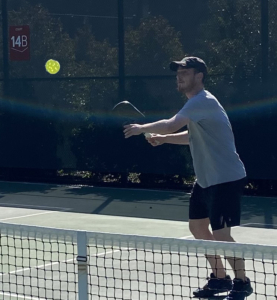 Thirty-four-year-old Kirby Morrison started playing pickleball about 18 months ago when a fellow tennis player introduced him to the sport. “I was instantly hooked,” he said. “I quickly realized pickleball was going to become an obsession.” He’s already played in seven tournaments in California and one in Montana on a vacation. “I won my first 4.0 tournament down in Monterey in July and recently won another one this September in Sunnyvale.  I’ve got a few more tournaments on my docket for the next couple of months and starting to play 4.5 tournaments now.”

Kirby plays at both Presidio Wall and Louis Sutter courts where he’s part of an early morning group of advanced players. “What I love about the game is the sense of community, there really is something special about it.  Everyone is super friendly and I think the shorter games (~15 minutes) allow for switching courts or partners, which adds to the fun of it all. In tennis, you’re often locked into a match for two hours and it can feel a little solitary. Pickleball truly feels like a community activity.”  There’s also the exciting sense that “pickleball still feels like a game that someone invented in their backyard a week ago. Strategies are constantly evolving and it just feels fresh and exciting.”

Looking ahead to Thanksgiving, Kirby has taught his sister-in-law to play, so he “won’t be the only one who sneaks away on Thanksgiving to go play some pickleball.” Thinking even further ahead, he has introduced his two-year-old daughter to the game. Though she’s not ready for competition yet, “we bump a pickleball back and forth using paddles in our living room. It’s great because she can work on her hand-eye coordination and I get some extra practice too! She often insists on holding a pickleball while she’s in her car seat, so I think it’s time to start planning for some daddy-daughter tournaments in about five-ten years.”

When Kirby isn’t bouncing the whiffle ball with his daughter at the park, he is teaching special education at Bret Harte Elementary School in the Bayview. Kudos to Kirby for his dedication and spirit in helping children succeed and learn new skills.