Ninety-year-old Miyo Lefever traded her tennis racket for a pickleball paddle at the age of 85 and she’s never regretted it. A tennis player since she was 30, it was time to move on. “The pickleball people kept saying ‘you should come and try it’ and one day I did.”

Barbara Fong had been her regular tennis partner, and soon after Miyo began playing pickleball, Barbara joined her. Now she plays with Barbara and Barbara’s grandson Tyler, age 12 and “a good player,” and a whole lot of other people. So many in fact that she can “go out to lunch every day with a new friend she met playing pickleball. I never met so many people as when I started playing pickleball.”

Miyo claims it’s a good game for the elderly, the players are very kind. Everyone is younger, of course, but they’re all willing to play with Miyo. “Most of my games are dinking, but every so often, when I’m feeling very energetic, I’ll play a regular game.” Except she won’t keep score. “I tell my partner they have to keep score.”

A year ago, Miyo crashed into the fence at the Goldman Tennis Center. An ambulance took her to Kaiser for stitches on the top of her head. She’s a little unsure of herself when she’s walking now but she’s still playing. “I love this game,” she said. “A lot of elderly people don’t have younger friends, I do. This is a good thing that came into my life when I was 85.”

Miyo always plays on Saturday morning at the Richmond Recreation Center. “Sometimes there are as many as 12 people waiting to play at each court. That’s a problem. We need more courts.” 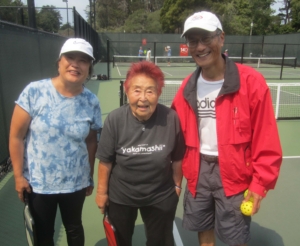