You’ve seen the game; you may even have picked up a paddle. You’re ready to learn, but not quite sure how to get started without embarrassing yourself.  Or you think those fancy looking classes at in Golden Gate Park look good, but kind of pricey.  Now what?

Experienced players are a great resource and tend to be helpful, but it would be nice to take a FREE INTRODUCTORY LESSON or two to make sure you’re going to like this game and to develop some basic skills. Thankfully, there’s help.

Every Tuesday morning from 10:30-12, beginners gather at the court at the Presidio Wall to learn the fundamentals of the game. It’s free and here’s a brief preview of what you can expect if you attend.

On November 29th, Amar Anand, a star pickleball player, was the teacher. As Amar is quick to share with his students, “pickleball changed his life.” He loves the game. It brought him out of a pandemic gloom, helped him lose 50 pounds, and develop a new circle of friends all of whom are pickleball players.

There were nine students in the class on that bright fall morning (summer and fall classes attract as many as 25 students). Amar covered four topics: the dink, volley, serve and scoring, before we began to play a game. The class was so successful that a group of four continued playing well past noon.

Amar is not the only instructor at the Presidio Wall. At other times of the year, Mary Hickey, Bill Kerry Davidson and Mel Mashman also take turns leading the class. Students are asked to attend no more than two classes to leave room for new students. Although the classes are free, donations are encouraged to support the purchase of paddles, balls, and keep the nets in repair.

I talked to some of Amar’s students after the class. Lisa Mann, a former tennis player, works part-time. Lisa was introduced to the game by her San Francisco friends. Then she went to visit her parents in Florida and played three times. “I love that it’s an intergenerational game. All of us played, my father, my nephew, siblings and in-laws. It’s great. I came here because I want to work on my game.”

Andrea Resnick, a retired attorney and former tennis player, has “a stiff back” and friends who couldn’t stop talking about the game. This was only the second time she played. Pickleball is a lot easier than tennis, she admitted,  you don’t have to run as much.”

Nina del Prado is also a former tennis player. She’s been playing pickleball for two months now. Her family introduced Nina to the game, they’re “crazy about it.” She thinks it’s “just as challenging as tennis, but gentler.” One of the players who stayed on after class beamed, “I’m hooked. This is so much fun.” 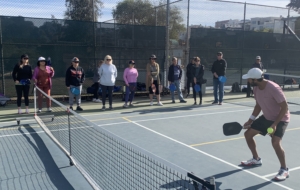 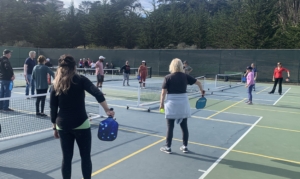 Yup, he covers the backhand