Rufus Browning – Back on the court again.

Several days a week, you can find 88-year-old Rufus Browning playing a vigorous game of pickleball at Upper Noe Rec Center, Louis Sutter, or George Christopher Playground. While he grumbles about “unforced errors,” he’s become a role model for other players who have been heard muttering, “I want to be like Rufus when I grow up.”

Rufus attributes his success to his 50 years on the tennis court. He laid down his racquet when he was 61 and his older brother and perpetual tennis opponent developed bursitis and had to stop playing. With the difficulty of finding a new opponent along with intense work and family responsibilities, he stopped playing. Squash, handball and ping-pong, other games of his youth, also fell by the wayside.

Rufus started playing pickleball in early 2021, when he was 87, with help from Wellington Chan, Mitch Tom and Barbara Fong. The take-up was not without problems. Early on, he pulled muscles in his left leg and couldn’t play for weeks. Once, at Louis Sutter, he ran too hard for a deep shot to his backhand and slammed into the fence, cutting himself on the forehead. He fell on the court several times and has scars on both elbows to show for it. Now his balance has improved along with his judgment about which shots are worth running for.

“I love pickleball,” he said, “the game and the community. I’m rejuvenated. I never thought I would experience that athleticism again. My cardiologist says, ‘Keep playing pickleball!’ And to tell the truth, I like seeing opponents lunge for my backhand spin shot.” 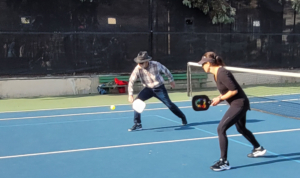 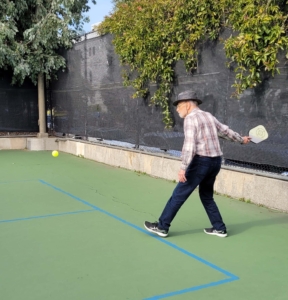