Ever played on court 15 at Goldman Tennis Center? Reserve it some time – it’s got full fencing and plenty of boundary space to try that “around-the-post” shot you’ve dreamed of hitting one day.

It’s also a “named” court, dedicated to Carolyn Harvey by the Ehrenfeld Family Foundation. So who is Carolyn?

Carolyn was the “godmother” of pickleball at Golden Gate Park.  Carolyn learned to play pickleball after she retired and, in an effort to recruit more people to play with, began playing daily and giving free lessons on Saturday mornings at the old GGP tennis courts. Weekdays, she’d yell to passers-by to “come on in, we’ve got equipment and we’ll teach you how to play.” It was because of Carolyn’s advocacy, joined by the efforts of other dedicated players, that the SF pickleball community has grown from a handful of players to the over one thousand members that regularly hit the courts.

Carolyn, who know lives in the Central Coast, was celebrated on April 14th, 2021, with the formal dedication of Goldman Tennis Center’s Court #15 for her role in bringing pickleball to San Francisco.  Martha Ehrenfeld, an active advocate for tennis and pickleball, addressed the happy crowd of players at the event and presented a plaque to Carolyn.  After some rousing games on Court #15, Carolyn headed to Stern Grove to meet up with friends old and new, to listen to speeches lauding her role in introducing pickleball to the community, and to receive a complimentary San Francisco Pickleball Community ballcap and mask.  That’s Carolyn in the front row, third from the left in the photo below.

Thanks, Carolyn and keep on dinkin’. 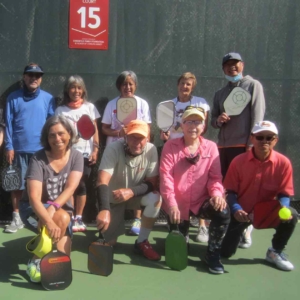 For the complete story in her own words of how Carolyn got involved in Pickleball,  read this https://pickleballsf.com/carolyn-harvey—my-sf-pickleball-story