Thirty-four-year-old Amar Anand is relatively new to Pickleball.  Although he tried a game years ago on the old Golden Gate Park Tennis Courts, it wasn’t until an out-of-town friend re-introduced him to the sport that he really got hooked. Now you find him and a group of five to seven other players playing “very competitive” pickleball ball at Louis Sutter courts every morning between 7 and 9 am.

He’s currently a 4.0 player, and he’s won gold in tournament play. Unlike many players, Amar never played tennis. “I’m known as a finesse player,” he said. “I hit a lot of very solid and consistent dinks; I don’t rely on power shots.”

In the 16 months since picking up the paddle, Amar says, “the game has totally changed my life.” He shed his 50-pound pandemic weight gain, developed a new social circle, and changed careers. A former tech product manager, he now focuses on pickleball instruction and giving lessons in San Francisco and Mill Valley, and also travels to Sunnyvale, Stockton, Foster City and Monterey to play.

But he considers the courts at Louis Sutter his home base and says, ”they are the best. It’s a good community, very diverse. The thing about pickleball is it’s a social game; anyone can play a real game the first time they pick up a paddle, and it’s a great mix of strategy and physical activity.” 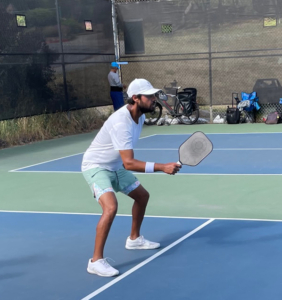 Reserved a court? You need to “check-in” or else!
Scroll to top